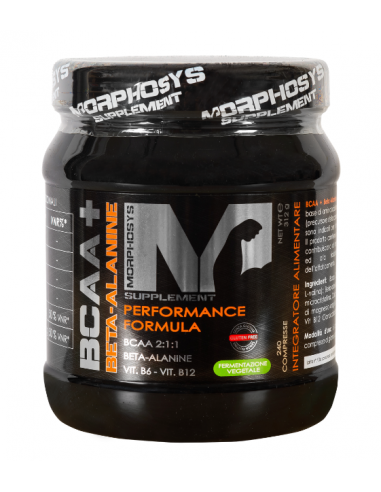 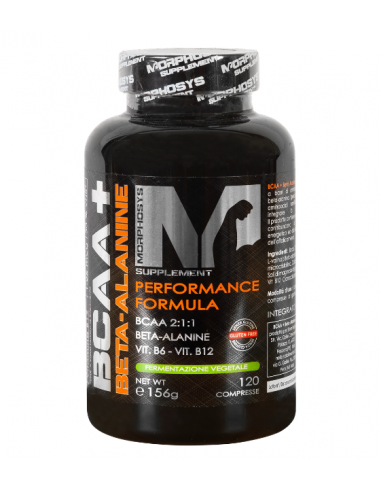 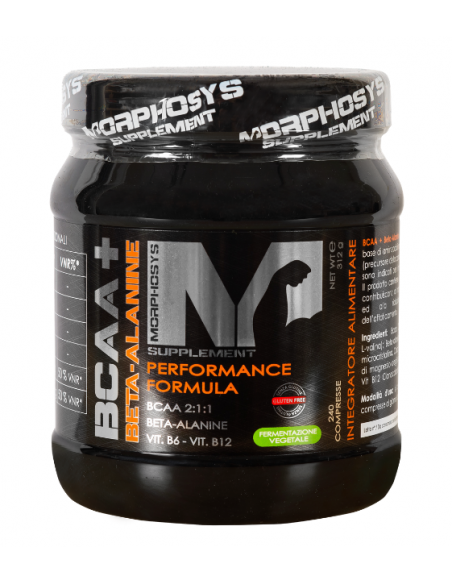 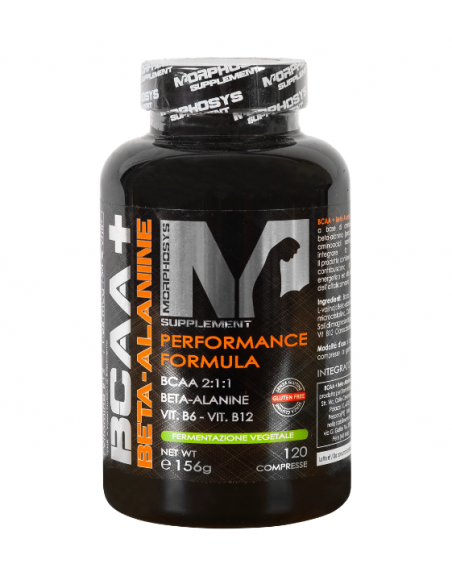 Bcaa + Beta-Alanine by Morphosys Supplement is a supplement of branched chain amino acids (BCAA Vegetable Fermentation®) enriched with Beta-Alanine. Branched-chain amino acids (BCAAs) such as Leucine, Isoleucine and Valine, belong to the category of essential amino acids, so they must necessarily be introduced through food to meet the daily needs of each individual. They do not undergo transformation through the hepatic filter, easily absorbed by the intestine, they arrive unscathed, through the circulatory stream, to the muscles responsible for metabolization and use both in the plastic and reconstructive phases and in the energetic ones. During a low intensity exercise, conducted at about 30% of the VO 2 max (a walk), the liver and spleen significantly increase the production of branched-chain amino acids that are readily oxidized to create energy when taken by the muscle with very high greed. Lack of these amino acids, fortunately very rare but present in case of severe malnutrition, are accompanied by a highly disabling symptomatology, characterized by tiredness and chronic fatigue, loss of muscle mass and significant alterations of the hormonal picture. The very high consumption of branched-chain amino acids by various athletes, especially for those of endurance such as marathon runners and cyclists or of pure power such as bodybuilders and weightlifters, almost three times that of sedentary individuals, can hardly be satisfied by the normal food intake , especially in the presence of constraints such as competition limits for body weight, and therefore requires an effective supplementary protocol. Unlike most other products used in sports, BCAAs are taken to fill an objective deficit induced by intense physical activity, the presence of which negatively affects both the performance and the health of the athlete. The use of branched chain amino acids allows you to: - Supporting muscular energy capacities both through direct oxidation and by replenishing the glucose-alanine cycle; - Protect muscle from damage induced by intense exercise , measured by reducing blood markers of muscle damage - Improve the recovery phase, restoring injured muscle structures and, in conjunction with carbohydrates, significantly increase the levels of protein synthesis, significantly decreased during physical activity. The addition of Beta-Alanine improves our product, the amino acid beta alanine is an atypical amino acid, characterized by the presence of the amino group in the beta position, which makes it structurally and functionally different from the other L-amino acids present in the human body. In part taken through the consumption of protein foods and in part obtained endogenously from the catabolism of carnosine and dihydrouracil, beta alanine owes its important biological properties to the peculiar chemical structure that prevents its use in protein synthesis processes, such as it commonly occurs for the other amino acids, favoring instead their transport to the liver where, combined with histidine, it guarantees the formation of the dipeptide Carnosine, of which it represents the limiting factor for synthesis. Carnosine thus synthesized, through the circulatory stream, reaches tissues free of carnosinase such as skeletal muscle and the brain where it intervenes in the detoxification and protection processes from reactive oxygen species, in local anti-acidity systems and in the stabilization of plasma membranes. The use of beta alanine in sports is closely related to this property. Studies show how the supplementation of beta alanine, cheaper and more effective than that of carnosine, can in just 8 weeks induce an 80% increase in the muscle reserves of this dipeptide with a consequent: - Increase in the anaerobic threshold and in the time of onset of the sensation of neuromuscular fatigue: tested on several athletes subjected to high anaerobic intensity exercises, for which the buffering action of carnosine has allowed to significantly delay the onset of local acidosis, responsible for the contractile block and the onset of the sensation of fatigue - Reduction of damage induced by intense physical exercise, measured by evaluating the blood concentrations of markers of muscle damage such as lactic dehydrogenase and creatine kinase. Several studies show how the combination with creatine can further enhance the potentiating effects of beta alanine. It is therefore clear that a correct supplementation protocol, supporting the muscle integrity and energy capacity of the athlete, will lead to an evident improvement in the athletic performance produced.

What is the difference between traditional amino acids and those Morphosys Supplement The main difference lies in the greater degree of purity, our amino acids are produced using exclusively plant sources, as opposed to the normal branched amino acids on the market, whose origin is animal. Vegetable fermented amino acids are used above all in the pharmaceutical field, since a sick organism requires a higher degree of purity than a healthy and trained body. Our laboratory offers you this supplement at a competitive price with high-end products, which in most cases do not use vegetable fermentation; each package is accompanied by a paper copy of the quality certificate. 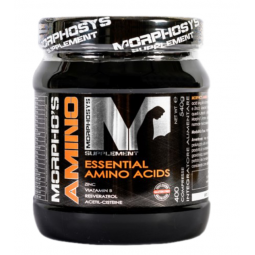